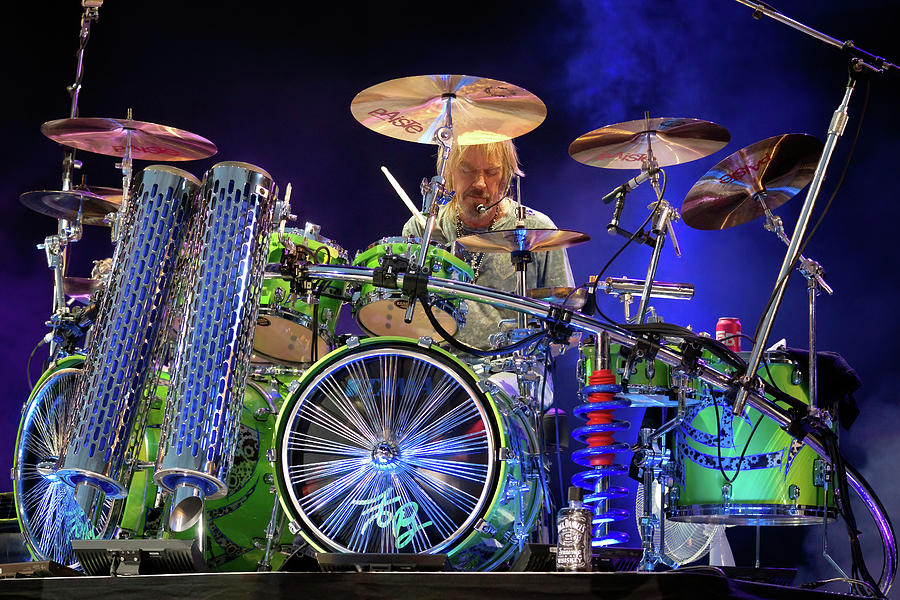 Frank Lee Beard - drummer in the American rock band ZZ Top. Frank Beard was formerly with the bands The Cellar Dwellers, who originally were a three-piece band, The Hustlers, The Warlocks, and American Blues before starting to play and record with Billy Gibbons and Dusty Hill as ZZ Top. The band released ZZ Top's First Album in 1971. Subsequent releases, such as their first top-ten album Tres Hombres (1973) and the singles "La Grange" and "Tush", gained extensive radio airplay. By the mid-1970s, they had become renowned in North America for their live act, highlighted by their performances during the Worldwide Texas Tour from 1976 to 1977, which was a critical and commercial success. ZZ Top reinvented themselves in the late 1970s with a new musical direction and their now-famous public image. Beginning with their albums Degüello (1979) and El Loco (1981), they experimented with instruments including clavinets, saxophones, and synthesizers. They gained international favor with the records Eliminator (1983) and Afterburner (1985). The popularity of their music videos, including those for "Gimme All Your Lovin'", "Sharp Dressed Man", and "Legs", helped propel them onto the television channel MTV and made them one of the more prominent artists in 1980s. Their Afterburner Tour set records for the highest-attended and highest-grossing concert tour of 1986. After additional acclaim with the release of their 10th album Recycler (1990) and its accompanying tour, their experimentation continued on the albums Antenna (1994), Rhythmeen (1996), XXX (1999), and Mescalero (2003). The group most recently released La Futura (2012) and Goin′ 50 (2019), the latter of which is a compilation album commemorating the band's 50th anniversary. ZZ Top has released 15 studio albums and sold an estimated 50 million albums worldwide. They have won three MTV Video Music Awards, and in 2004, they were inducted into the Rock and Roll Hall of Fame. When ZZ Top started, Beard was known by the nickname "Rube" and was credited as "Rube Beard" on the first album and on Tres Hombres, the band's third album, but is listed under his real name on Rio Grande Mud, their second album. After Tres Hombres, he was credited as "Frank Beard" on all the band's albums.

Thanks a lot Bill!

Congratulation.....your wonderful work has been featured in the 1000 Views on 1 Image Group l/f/p

This really is an exciting image: facial expression, colours, shapes, the ambience. l/f

Thank you very much Makiko!

Congratulations on your feature in the Fine Art America Group "Images That Excite You!"

Your beautiful work has been featured on the FAA group "Photography is Fun". Congrats!

Your beautiful work has been featured on the FAA group "Photography is Fun". Congrats!

Thank you very much Linda! Drummers rarely get as much attention from photographers as singers or guitar players for example. But Mr Beard has such an amazing drum kit he cannot get unnoticed! I will probably upload a few more ZZ Top images in the next few days.